Race results can be found on the following websites:
2020/21 Highlights
The whole Winter Series 2020-21 and many of the Haslers did not take place due to the Coronavirus pandemic. There was no Hasler league and no Finals.
BSCC club member James Smythe won over44 MK2 with Stuart Dunn, and was 5th in over49 MK1 at the National Marathon Championships at Reading.
Chris Sze competed in the Word Masters Championships 2021 at Bascov in Romania 27-28 Sep 2021 where he won a silver in Mens 60-64 K2 (with Colin Simpkins of South Africa) - ICF World Masters Canoe Championship
2019/20 Highlights
The Winter Series race at Stortford was attended by 131 paddlers, with BSCC second. The finals of the Winter Series at Leaside did not take place due to Storm Ciara. BSCC was 3rd overall. Jamie Gaulton & Jamie McAdam won the u16 K2 trophy.
The Chelmsford Hasler had been held as usual in October 2019, but the remainder of Eastern Region Hasler races, scheduled for 2020 were cancelled due to Covid.

2018/19 Highlights
The BSCC Winter Series race attracted 127 paddlers from 10 clubs - we finished  2nd at this race. Across the series we were 3rd. Octavia Abbott won the Vet Ladies trophy (for 3rd successive year) as well as the Ladies class overall.
We hosted the fourth Bishops Stortford Hasler race, and finished 5th in the region. 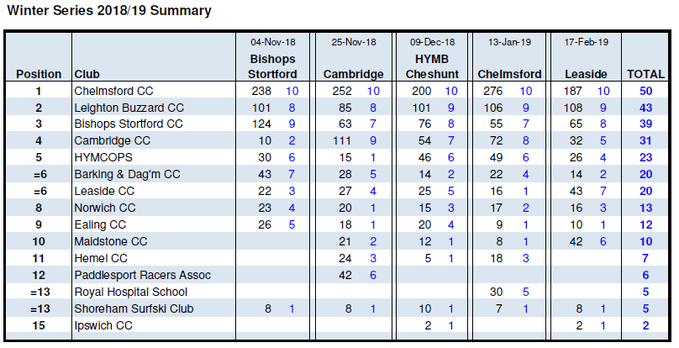 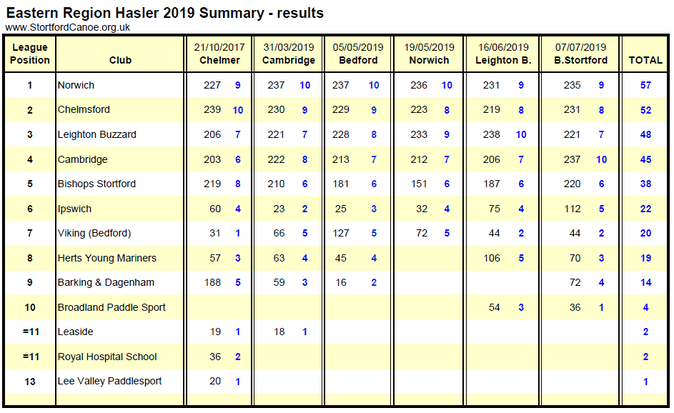 2017/18 Highlights
Twelve clubs joined us for the Stortford Winter Series race. We finished the series in 2nd place.
The Hasler season began excellently with a win at Chelmsford. Stortford put out a team of 37 for our home Hasler race, which was attended by 183 competitors from 12 clubs - we won! We finished the season joint 1st in the Eastern Region.  At the Final in Norwich, the club achieved 9th place out of 31 clubs participating.
Series winners from the FRA Summer Series regattas included Libby Gaulton (u10F), Lexie White (u18F) and Catherine Robinson (Sen F). 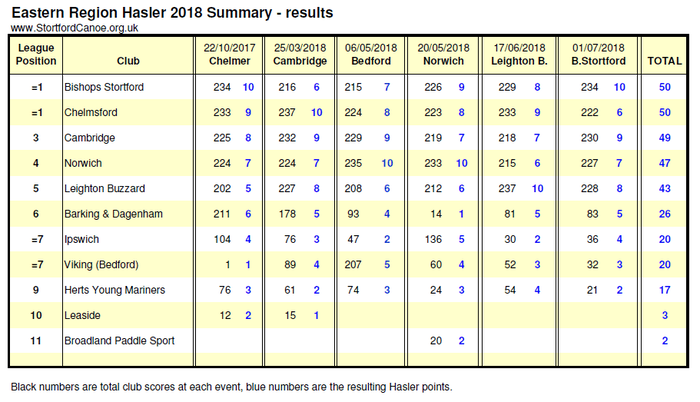 2016/17 Highlights
The Stortford Winter Series was attended by 156 paddlers from 9 clubs. Stortford put out a team of 46 and won 2nd place. The was 2nd overall in the Winter Series and won the Dick Grieve trophy.
The Second Bishops Stortford Hasler race attracted 189 competitors - Stortford finished 5th at this race and also 5th in the region.
2015/16 Highlights
The Winter Series opened at Stortford with 154 paddlers from 8 clubs - Stortford took 2nd place. We finished the series 3rd overall and & won the Bob Porter trophy for participation by under 12s.
At the National Sprint Championships Danny Beazley became over-39 National Vet Champion.
In May 2016 BSCC won the Bedford Hasler - the first Hasler team win since September 2008.
The club hosted a Hasler race on the Stort for the first time - not only was the total number of entries (196) the greatest seen for an event at the club, our own team of 45 was the largest put out by Bishops Stortford CC for many years. BSF came 2nd. Eleven Eastern Region racing clubs participated + 2 out of region paddlers.
BSCC finished the season 4th in Eastern region.  At the Final in Worcester, the club achieved 6th place - Josh Young won silver in Div 3 and Danny Beazley and James Smythe won the Bill Sparkes trophy for the highest-placed Veteran K2.
2014/15 Highlights
The Stortford Winter Series race was attended by 166 paddlers from 12 clubs. Stortford came second.
Sim English was promoted into Div 2 from his performance at the Luzemore. Matt Parkes won Div 3 at the Cambridge Hasler and was also promoted to Div 2. Joe Surrage (Div 4) raced up into the amalgamated Div 2/3 race and came 3rd, ahead of all the Div 3 entrants and so was promoted to Div 2.
Ella Beatty was selected to attend the 2015 Gent International Marathon as part of GB Development Squad - she came 3rd in the 18km Junior Ladies race.
In July 2015 the last Huntingdon Hasler to be organised by BSCC attracted a massive 216 competitors – all of region’s 11 racing clubs took part as well as some independents and out of region clubs. BSCC finished the season 4th in Eastern Region.  At the Final in Wolvercote, club achieved 13th place. Only one Lightning paddler attended the final, but over the whole Lightning series Stortford were 15th.
At the National Sprint Championships BSF 16th in the McGregor Paddle competition.
2013/14 Highlights

Josh Young took a fantastic 4th place in the 125-mile Devizes to Westminster canoe race at Easter 2014. By the time he arrived at Westminster, Josh's total race time was 17:23:21.

Simeon English competed in the Piestany International Regatta in Slovakia in May.

Ella Beatty was named the 2014 East Herts Young Performer of the Year at the Community Sports Awards in July.

A small team from BSCC went to the Flanders Cup International Regatta at Sobeka, Belgium, in September and brought back nine medals. Ella Beatty won Gold in Girls U18 K1 500m. Isabelle Gurney won Silvers in u16 Girls K2 500m and 2000m, and also K4 500m. Isabelle, Ella and Emily Gurney were also in the crew which won Gold in K4 u18 500m. Matt Parkes won a Silver in K2 5000m and Bronze in K4 1000m. Altogether an outstanding performance for their first outing to an international sprint event.

There was a fantastic result for Stortford at the 2014 Hasler Finals at Richmond - Matt Parkes won Gold in Div 3 and Isabelle Gurney won Silver in Div 6 (promoted to 5). The club finished in 10th place overall - BSCC's best Finals result since coming 9th at Burton in 2008.
2012/2013 Highlights

Malcolm Duckworth was awarded the East Herts Coach of the Year in July 2013. Malcolm has been coaching at the club continuously since 1996.

In marathon, BSCC were second overall in the Essex Winter Series. Individual class winners were Richard Baker & Paul Surrage (Marathon C2) and Ant Wright (novice C1). Sim English was selected to take part in the Gent International Marathon in Belgium (23/3/13), and finished 6th in u18 Men's K1, despite winds over 20mph, temperatures only just above freezing, a snow blizzard and intermittent hail storm. Mike Panrucker completed the non-stop DW in 24h 33m with Bill Playle (B&D CC) in some of the severest weather the race has ever seen - 44th out of the 160 boats who set out in the Senior Doubles Kayak class (59 crews failed to finish at all). In May Matt Parkes was promoted to Division 3. In August, Toby Booth was 4th in u10 Boys Lightning at the National Marathon Championships, Pangbourne, and again at the Hasler Finals in Reading in October. The BSF Lightning squad were 6th at the Reading Finals. Having finished the season in 4th place in the Eastern Region, BSCC achieved 16th place overall at the Hasler Finals, including a 4th place in Div 3 for Josh Young, earning him promotion to Div 2.

In sprinting, Simeon English was selected for GB Canoeing's National Talent Squad, based on his successful performances in Boys B at the National Sprint Regatta in May 2013 (1st K4 1000m and K2 1000m, 2nd in the K2 500m, 4th 500m K1). The National Sprint Championships in September saw two gold medals for Sim in the Boys B events: 500m K1 and 1000m K1, as a result of which he was promoted to Boys A. Matt Parkes took gold in the 500m K1 Boys C at the June regatta and was promoted to Boys B. In the Essex Sprint series, first place series trophies were won by Rosie Whittington (u10F), Toby Booth (u10M), Megan Kenny (u18F), and Catherine Robinson (u23F).

Catherine Robinson became u23 Champion in the last race of the 2013 National Wavehopper Wild Water Racing Championships at Nottingham on 15 September.
2011/12 Highlights

In sprinting, BSCC came 20th in the Inter-Club Regatta at Nottingham, improving on the previous year's position by 9 places. During the year, Sim English and Jake O'Sullivan were promoted to Boys B and both were selected to represent GB in the Sobeka regatta in September. Toby Booth won a Silver medal for his performance amongst the under-10s at the 2012 National Sprint Championships, while Megan Scott was also awarded a medal for her achievement in under-10s across the earlier regattas.

Reduced team numbers meant that the club only managed 5th in the Eastern Region Hasler series, but there were many good individual performances reflected in a number of promotions: Sim English to Div 3, Matt Parkes to Div 4, Megan Kenny and Laura Warbrick to Div 7, Aisha Sollars to Div 8, and Paul Surrage & Richard Baker to Div 8 in C2.
2010/11 Highlights

Jake O'Sullivan took two medals at the National Sprint Championships (Nottingham, 10-11 Sep 2011) in Boys u14 K4 with partners from other clubs (silver in 1000m and bronze in 500m). In 2011, the club also hosted our first Hasler race, taking over the organisation of the Great Ouse Hasler at Huntingdon.
2009/10 Highlights

At the National Marathon Championships at Chester (31 July - 1 Aug) Leanne Brown won two golds (Ladies u23 K2 and Mixed Open K2) and a bronze (Ladies u23 K1). Steve Whipp was 2nd in Div 7 and Rachael Pinnock was 8th in u18 Girls K1. Rachael Pinnock & Joe Fitzpatrick were selected to race in the GB Junior Marathon Development Team in Ghent; Rachael was 4th in junior ladies. In Haslers, Jake O'Sullivan was promoted three times in as many races to go from Lightnings to Division 6 within one year.The club were 19th in the National Hasler Finals at Worcester (10 Oct 2010). The BSF Lightning team were 12th nationally in the Geoff Sanders Memorial Trophy competition, and 3rd of the Eastern Region clubs.
2008/09 Highlights

Highlights of the season included winning the Huntingdon Hasler Marathon (14/9/2008; 2009 season). At the National Hasler Finals at Reading (27/9/2009) the main BSF team came 13th and the Lightnings came 3rd with a silver for Isabelle Gurney in u10 girls and bronze for Emily Gurney  in u12 girls. According to provisional calculations the Lightning team were 4th nationally across the series (Geoff Sanders Memorial trophy).

Bishops Stortford were 9th overall at the National Hasler Finals at Burton: Tony Brett & Joe Fitzpatrick won gold for div 4/5/6 doubles and Ant Cayford won the Ken Pereira Cup for the 2nd year in succession.The BSF Lightnings team were 5th, and 10th across the season as a whole.