Sue's account of supporting Euan in the 2017 Devizes to Westminster race:
When I was initially asked if Euan would like to take part in the prestigious Devises to Westminster International Canoe Event, paddling 125 miles over 4 days I thought this was something which was outside of his ability. Afterall he'd only been paddling for approx 18 months, and he was just 15 years old. However Euan wanted to do it, so as a family we all supported him!

We found out there was a great deal of knowledge within the club regarding the DW and people were very willing to help and share experiences, and guided us through the four Waterside races so we could gauge average speeds over different stages of the course, this would be essential in the planning /support approach for the DW. ​ 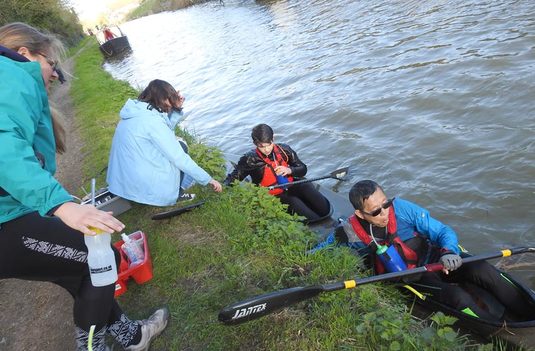 (photo credit: Maria Sze)
Being part of the support crew for Chris and Euan, it became very aparant that we all needed to have great co-ordination and communication skills, it was key that we all needed to work together as one team, supporting our men in the boat. We were given information for each stage/day which included all accessible portages, with post codes and a sat nav that was pre-programmed, everything that we needed! We just needed to learn how to effectively feed and change water bottles "on the run" for our team.

As we got through the Watersides we learnt a lot, and I still wondered if this massive feat could really be accomplished. Time drew nearer and we had to make a decision, do we commit and pay our entry fee? We paid the fee, we were committed. Accommodation was now booked, equipment brought, or borrowed, we were all set....
The Easter weekend loomed, I know I was feeling anxious, Euan didn't appear to be phased about the upcoming endurance event, we packed first aid kit, dubbin, support foods were all planned and purchased, we were on our way.....
​
I must say that the Easter weekend itself was a little of a blur with early boat check for the next days start points. The lessons we learnt at the Watersides was absolutely invaluable, we worked really well to support the boat so that at every opportunity we fed and watered our men, we leapfrogged portages so we could get to as many places to see and support them as possible, I am sure that our smiling faces along with the snacks we forced into their mouths kept them going through each strenuous day.
We met up in the evenings as a group for dinner which was a great boost for the whole group taking part, for both paddlers and support teams.

It was the final day, the Thames section and last push, the river was so wide there were BIG boats and there were NO portages, as a mum I was needless to say very, very anxious.

I saw them pass under Richmond Bridge and they looked great, we parked up at Westminster and awaited sight of them coming into the finish, that was probably the most relieved I have ever been to see Euan and the proudest I have ever been.

It just goes to prove that with great determination and the right support, anything is possible.